A May Day Meeting with Delegation to Northern Syria 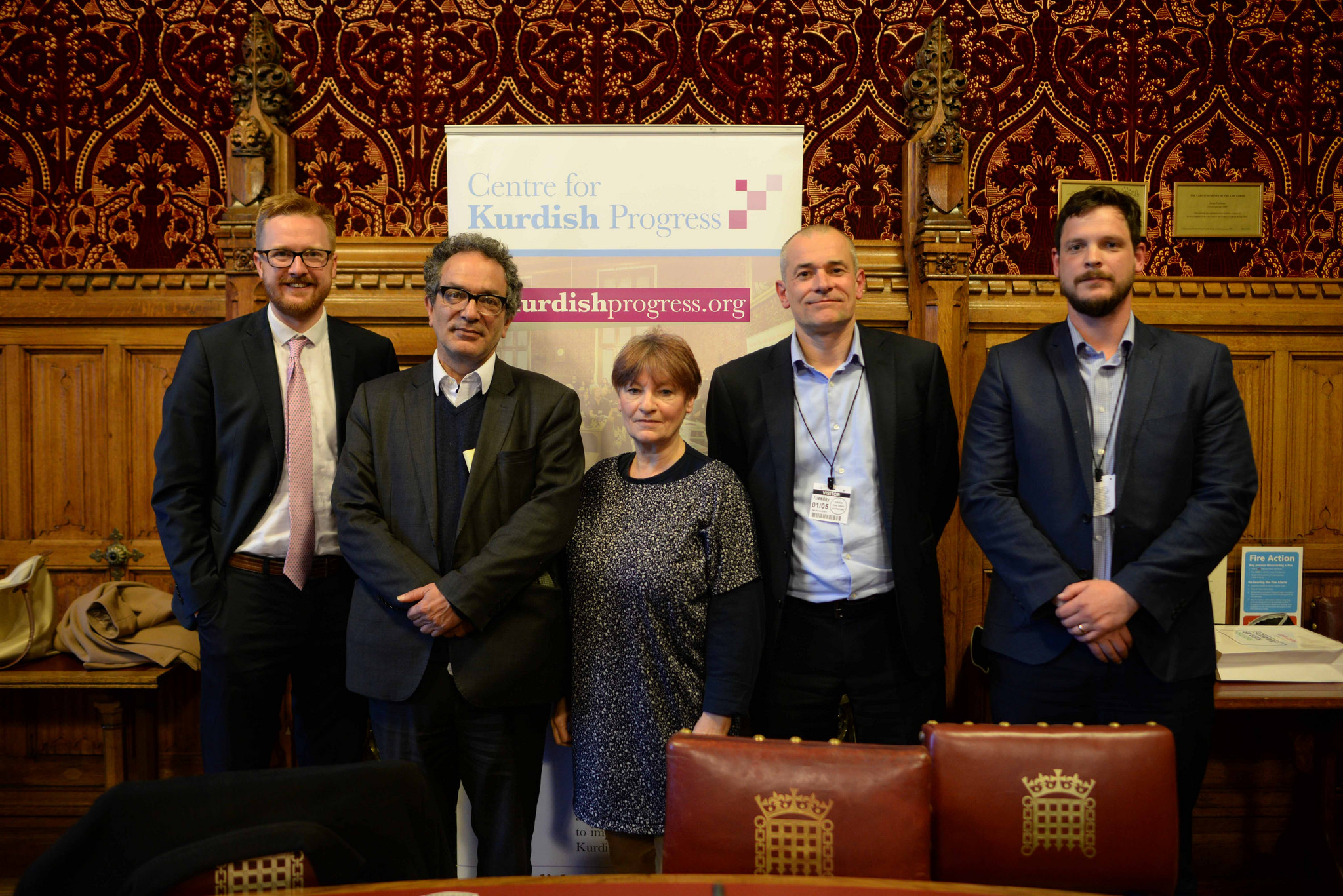 The Centre for Kurdish Progress held a public forum with the Delegation to Northern Syria on 1 May 2018.

The event was kindly hosted by Lord Glasman in the Houses of Parliament and was chaired by Christine Blower, National Union of Teachers (NUT) International Secretary.

Organised by the Centre for Kurdish Progress and Unite the Union, the delegation visited Rojava, Northern Syria in the first week of April 2018. It was made of Lloyd Russell-Moyle MP, Lord Glasman, Simon Dubbins, Director of International & Research at Unite and Ryan Fletcher from Unite. They visited Kobani, Qamishli and met with local, council and parliamentary leaders from the Federation of Northern Syria as well as soldiers from the YPJ and bereaved family members from Kobani. They also met with Shia Parliamentarians in Baghdad.

The delegation witnessed the building of a broad-based democracy in Northern Syria, the leadership participation of women in its structures and the energy and hope of building a constructive alternative to ethnic, religious and nationalist models. They also observed the systematic attach on this democratic innovation from the Turkish state and witnessed the refugee exodus from Afrin.

Lord Glasman praised the broad-based democratic system built in Rojava by referring to women’s active participation at every level of decision-making. He added that it was not only Kurds, but Syrian Christians, Yazidis and Sunni Arabs participate in the democratic system. More importantly, he said, they also own every element of the democracy that they built together.

Ryan Fletcher echoed Lord Glasman’s comments and added that the democracy in Rojava is a home-grown democracy which is built on a grassroots movement and because of this, Rojava is an island of peace amongst conflict and chaos.

Llloyd Russell-Moyle MP spoke about solidarity with the people of Rojava who are allies of the British and the West in the fight against ISIS and other extreme religious groups in the region. He pointed out that Turkey’s military offence in Afrin created further imminent threat to the existence of communities in Rojava and that the British Government must support its allies and offer a solution rather than being silent. Russell-Moyle indicated that Rojava does not even receive UN’s humanitarian aid as the aid is only provided to state actors. Russell-Moyle commented that he found the trip very inspirational as he could first hand see how a democratic and peaceful system can be built with community effort in a region of constant chaos. He urged the British government and the international community to recognise Rojava, to provide resources for health and hospitals and to ensure that the people of Rojava are at the peace negotiation table.

Simon Dubbins spoke passionately about solidarity with the Kurds in the region who share the same democratic values with the British. He reiterated Unite the Union’s support for the Kurdish cause and warned against ethnic cleansing by Turkey in Afrin and other areas of Northern Syria.